Alan Dellapenna poses with the Alex Kelter Vision Award he received at the annual meeting of the Safe States Alliance on Sept. 7.

The award is the organization's highest honor and recognizes individuals who have brought leadership and vision to the field of injury and violence prevention.

“This is a well-deserved honor, as Alan's vision and leadership in this field has moved forward a large body of work in North Carolina and nationally, that has and will positively impact the lives of many,” said Dr. Susan Kansagra, DPH’s Chronic Disease and Injury Section Chief.

Evelyn Foust, the Division of Public Health’s Communicable Disease branch head, was selected by the AIDS Drug Assistance Program (ADAP) as the recipient of the 2017-18 "William E. Arnold" ADAP Champion of the Year Award for her work to improve access to care and treatment for people living with HIV/AIDS – including the AIDS Drug Assistance Program (ADAP).

Nominations are solicited annually from the community, and honorees are selected by an awards committee comprised of ADAP board members and stakeholders. Foust will receive the award at the end of ADAP’s 11th annual AIDS Drug Assistance Program Conference, Sept. 20-21, in Washington, D.C.

Broughton Hospital is ranked 14th on a list of 2018 Most Beautiful Hospital in the US by specialty healthcare staffing provider Soliant.

The 134-year-old hospital, one of three psychiatric hospitals operated by NCDHHS, is the oldest building to make the rankings. Soliant says of Broughton, “It’s marble-and-brick façade proves that some of the most beautiful buildings are traditional designs that have stood the test of time.” 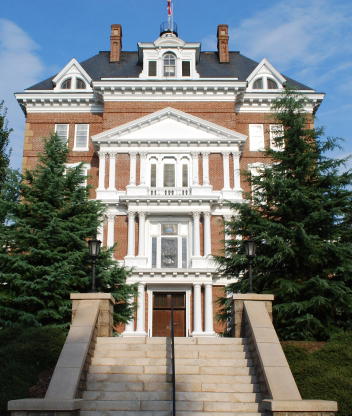 North Carolina's Money Follows the Person (MFP) program celebrated a milestone in August when the team supported its 1,000th transition. The person transitioning made the move from a nursing facility back to her community where she is enjoying the company of her family and friends.

MFP is a national demonstration program with 45 states participating. North Carolina has participated in the program since 2009, working with Medicaid-eligible people with chronic conditions and disabilities to transition them from institutions back into the community with supports. Participants receive supports through one of four Medicaid waiver programs.