High school students are at risk of becoming addicted to nicotine, a fact confirmed by a North Carolina Department of Health and Human Services analysis of vaping devices confiscated from students at seven schools in various parts of the state.

Nicotine — the addictive drug found in cigarettes — was present in 85 percent of e-cigarette and vaping devices and containers analyzed by the department’s State Laboratory of Public Health found. However, youth are not always aware that e-cigarettes and vaping devices contain nicotine. A U.S. Monitoring the Future Study (2018) found that 11.5 percent of 8th–12th graders perceive they are “only vaping flavors” with no nicotine, and this percent increases with age. A Truth Initiative Study (2018) found that 63 percent of Juul users (age 15-24) did not know these products always contained nicotine.

“The rise in use of e-cigarettes by youth is alarming,” said Dr. Elizabeth Tilson, State Health Director and Chief Medical Officer for DHHS. “We now have a new generation of youth at risk of becoming addicted to nicotine and they may not even know it. The use of nicotine by school-age children is a concern because human brain development continues to age 25. Early exposure to nicotine can negatively impact brain development, attention, learning and memory. It also can prime the brain for future addiction.”

Conducted by the State Laboratory of Public Health in partnership with the Division of Public Health’s Tobacco Prevention and Control Branch and the NC Department of Public Instruction, the study found that of the 76 devices confiscated by schools, 33 (43 percent) were Juuls. Commercially sold Juul pods sold at that time are equal to about two packs of cigarettes. Products like Juul resemble flash media drives used for storing and sharing files on computers. Due to increasing use by youth, North Carolina Attorney General Josh Stein launched an investigation into Juul marketing practices last year.

While the FDA has authority over these products, according to the current FDA time-line, the products themselves would not begin to become fully regulated until August 2022.

QuitlineNC is North Carolina’s tobacco cessation program, which can help people quit e-cigarettes as well as other tobacco products. For free help to quit, call 1-800-QuitNow (1-800-784-8669) 24 hours a day, seven days a week. 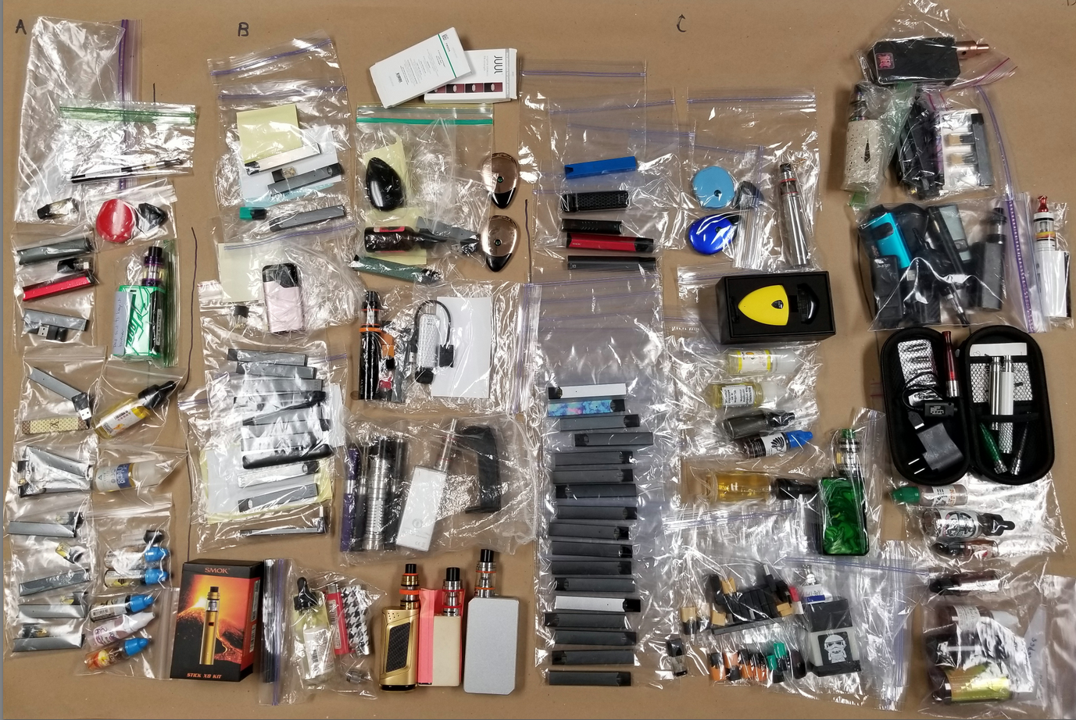 The e-cigarettes collected from the seven schools studied – prior to testing.

This press release is related to: