As North Carolina’s tobacco-free schools law marks its 10th anniversary, the state has seen cigarette smoking reduce 50 percent among high schoolers since 2008, but the latest N.C. Youth Tobacco Survey, published in June, shows that more than 16 percent of North Carolina high school students use e-cigarettes, and 23 percent stated they are considering use of these products in the coming year.

Given this trend — and with a new school year beginning — the state is updating its signage in North Carolina public schools to remind students and staff that all tobacco products, including e-cigarettes, are banned from use on school grounds and at school-sponsored events.

“E-cigarettes are now the most commonly used tobacco product among youth, and their use has increased exponentially,” said Dr. Susan Kansagra, chief of the Chronic Disease and Injury Section in DHHS’ Division of Public Health. “While we’ve reduced cigarette use, the use of e-cigarettes by youth overall and especially on campus is a public health threat. Schools are reporting they are commonly confiscating e-cigarettes.”

To ensure school employees, students and visitors are aware of the tobacco-free schools law, the Division of Public Health’s Tobacco Prevention and Control Branch is working with the North Carolina Department of Public Instruction to update tobacco-free signs in North Carolina schools. E-cigarettes were not depicted on the original signs, put in place in 2008.

“Addressing e-cigarette use among young people is an important public health priority, as they contain nicotine, are addictive and can impact brain development,” Dr. Kansagra said. “Further, young people who use e-cigarettes are more likely to smoke cigarettes in the future than those who do not use e-cigarettes, thereby increasing their risk of heart disease, lung disease and many cancers.”

Since the law was enacted, North Carolina’s high school cigarette smoking rate has decreased from 19 percent in 2007 to 8.9 percent in 2017.

“Prohibiting the use of tobacco products in schools has contributed to the reduction in cigarette smoking among high school students,” said Jim Martin, director of policy and programs for the Tobacco Prevention and Control Branch. “That’s not a coincidence. An early study by the Tobacco Prevention and Control Branch showed that schools with tobacco-free policies had fewer students smoking, and the rates dropped more the longer those policies were in place.”

For more information on programs and initiatives of the Division of Public Health’s Tobacco Prevention and Control Branch, visit www.tobaccopreventionandcontrol.ncdhhs.gov. 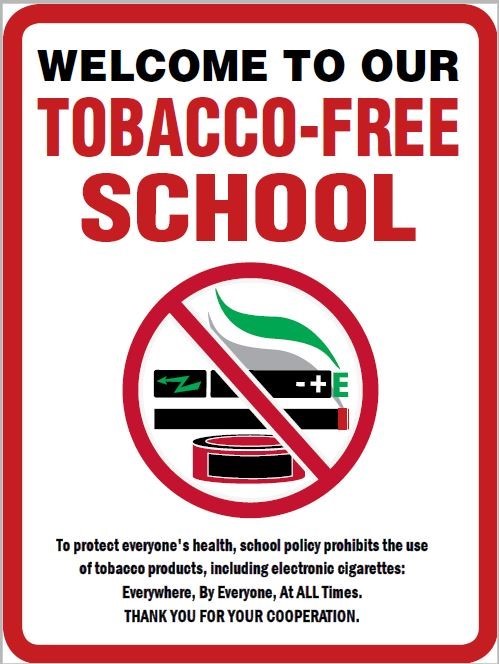 Signage in North Carolina public schools is being updated to depict e-cigarettes.

This press release is related to: